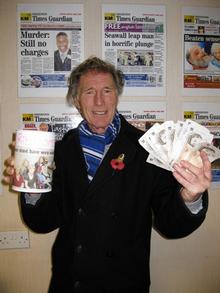 Donations are still pouring in for a disabled children's charity that had a collection box stolen.

Sheppey-based Ribbons had its box taken from a kiosk in Beachfields, Sheerness, between October 24 and October 25.

Following a report in the Times Guardian, we were inundated with calls from generous readers who wanted to donate to the charity.

By the time we went to press last week, Ribbons had already been pledged almost £200.

And it hasn't stopped there - we are still getting people putting money into a collection box we have put on the counter in the office.

The total now stands at well over £300, after Sheerness Masons from the Wildfire Cork Lodge gave £100.

On Monday, lodge member, Barry Barnes, came into the office to pass on their donation.

He said they raise money throughout the year which is always given to local children's charities.

After reading the story, they decided Ribbons was a worthy cause.

The decision was made at the lodge's meeting on Saturday.