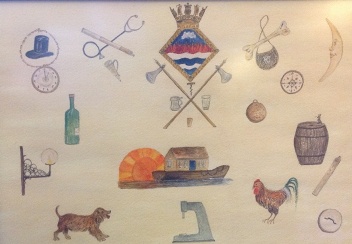 Distinctly nautical in form, membership is open to Master Masons in good standing who are either a companion in the Holy Royal Arch or a Warden, Master or Past Master of a Craft Lodge. The origins of the degree ceremony are unknown; the ritual is satirical and based around the era of Noah and the great flood..

All fees received by the Lodge must be paid, in full, to the treasurer of a charity, preferably a children's charity with no deduction being made for administrative expenses. Meetings are characterised by regular humourous 'fines', in which a single member, or (more commonly) everybody present, is required to pay a fine by throwing a coin into a bucket or other receptacle. All fines are also applied to charitable purposes, usually a children's charity.

Members are required to carry a pocket cork at all times, and be able to produce it on demand. Any member being unable to produce the jewel is fined, this being given to the Lodge treasurer at the next meeting for contribution to charity. The nature of the pocket cork varies. In some traditions it is a piece of cork in a metal ring, in others it is a small cork set in a silver clasp (which may be worn as, for example, a watch fob), in still others it is a flat piece of cork which may be easily carried in a wallet.

Membership is not onerous—the only costs on top of membership being dining fees, drinks, etc. The idea and aim being to raise money for children's charities, and with Corkies having fun in so doing.

Candidates can be proposed and initiated on the same night. Compared with masonic meetings, dress is informal - as meetings tend to be boisterous affairs, in good spirits. The ritual and initiation part takes up the first part of the evening, followed by festivities that are “closer to a Scottish Harmony than an English Festive Board”. Hats are worn during the meeting, with head-gear style being of personal choice - the sillier, the better.

The presiding officer is known as the Admiral. All board or lodge officers have naval titles, roughly equating to the officers in a Craft Lodge, with jewels of office (when used) often being borne on strings of corks.

The Cork tradition is particularly strong in Scotland, where lodges are often attached to lodges of Mark Master Masons. In the United States it forms an informal and optional part of the formal system of the Allied Masonic Degrees.

In England the Grand Lodge of Mark Master Masons holds the oldest known English Cork records, manuscripts, and regalia. Before the Second World War there are various references to English Mark Lodges working the Cork degree at dinner after their formal Mark meeting. A body known as the 'Great Board of Corks', and consisting of senior Grand Officers of the Mark Grand Lodge, controlled the Cork degree for many years, but fell into abeyance. By 2002 it had been revived, with at least one surviving member of the original Great Board. However, some old Cork lodges have histories originating without reference to the Great Board, and may properly be considered independent of any formal organisation. In general, English bodies styling themselves a 'Lodge of Corks' are independent, and derived from the older Scottish tradition, whilst English bodies styling themselves a 'Board of Corks' are under the jurisdiction of the Great Board of Corks.

While relatively new in Australia, it follows the tradition of the Cork Order in Scotland and England. However, its membership is open to all Master Masons in good standing. Currently there is only one authorised Cork Lodge in Australia operating in the city of Brisbane (Queensland). This lodge is Endeavour Cork Lodge No.1 and was established in 2011.

Lodges associated with the Grand Fleet of Independent Cork Lodges. 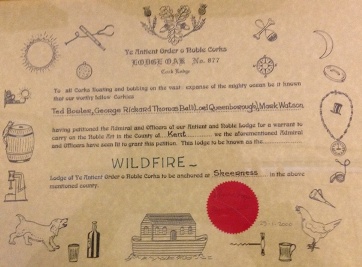 The Grand Council of Noble Corks of Australia

· The Alt Board of Corks, No 1, Ormskirk

· The Wenning Board of Corks, No 3, Morecambe

· The Fleet Board of Corks, No 4, London

· The Serpentine Board of Corks, No 6, London

· The Wyre Board of Corks, No 7, Blackpool

· The Croal Board of Corks, No 8, Boulton